I saw one of these on Pinterest & loved it & decided "I can do that!".   I have that thought alot when I see things & I'm usually wrong but I thought I'd try this one.  It's certainly not fancy or perfect but I'm happy with it. 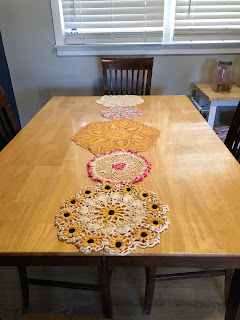 I collected doilys for a couple of years.  They are getting harder & harder to find for awhile now because they are certainly an art of the past.  I had several in my collection box but chose these because they seemed to fit together.   I would have gone with blue as a primary color.  But blue is hard to find & I settled on the pink.  The one with the tan & the black eyed susans is one my granny Annie made.  So that was a given.  I tried it in the middle & it didn't look good.  The large gold one seemed to fit better.  I like it.

Here it is with my table centerpiece.  Not sure if it will stay.  I'll have to watch it for a couple of days to see. 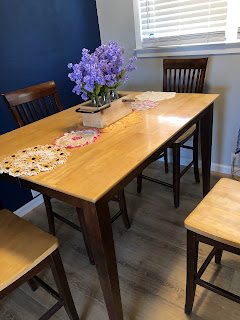 - May 14, 2022 No comments:
Email ThisBlogThis!Share to TwitterShare to FacebookShare to Pinterest 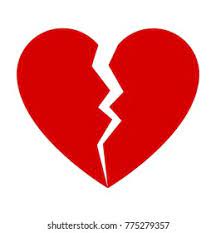 So we have an update on  our basketball situation--one of our star players, trying to NBA it, has come out to say IF he returns to college, he's going to Kansas or Gonzaga. And I am stunned.  And heartbroken.  He seemed to love Tech & certainly Tech loved him.  And he's turned his back on us & told us to F off.  It's not personal toward me but I was all in & I'm taking it personally.  Life has changed.  He has no loyalty & KU? Gonzaga?  All of my loyalty to him is gone.

Again, as I said before, he has to do what's best for him.  Neither of those programs is what's best for him but that's just my opinion.  It's hard to explain how or why I feel like I do.  It's just the end of the era & I hate things that end like that.  It's me caring for someone more than they care for us.  And yes, I know it's a game, played by people I don't even know.   And it's a world that's all about money.  I guess it's just that for all of these years I have had blind loyalty to our teams & that is not even possible anymore. Every transfer & commit will be met with a "whatever".  I will no longer breathe Texas Tech basketball.  I want them to win but if they don't?  Shit happens.

I'm probably going to have to come back tomorrow & read this to see if it makes any sense.   It doesn't even make sense to me.

I've found in my real life, as I've gotten older, that I've grown apart from my real friends.  Some are, frankly, gone & I know that's my fault.  But I justify it in my mind.  I have always gone out of my way to keep in touch & to make lives easier for those around me.  And then their came a point that I had friends that I feel would not cross the street to help me.  I don't ask for help often but I mostly don't feel like anyone is there for me.  I'm not a gut spiller but when I call someone to talk & they make the entire conversation about them & don't even listen to me, it hurts my feelings.  It's childish but it's how I feel.

I have a friend that I used to talk to once a week.  She lives in another city.  And at the end of last year she had some knee surgery & I'd call to check on her because she was not doing great.  But she told me that she'd call me from now on so I stopped calling.  I did call when I went down to watch baseball in the metroplex in February but I have not heard from her since.  It hurts me in a way but every conversation was about her, her husband & her son & family.  She doesn't call but likes anything I do on Facebook & that bothers me.  I feel stalked for some reason.

Again, I'm on a big rant right now.  And my brain is going 300 miles a minute right now.  Tomorrow will give me a new perspective.

- May 01, 2022 No comments:
Email ThisBlogThis!Share to TwitterShare to FacebookShare to Pinterest 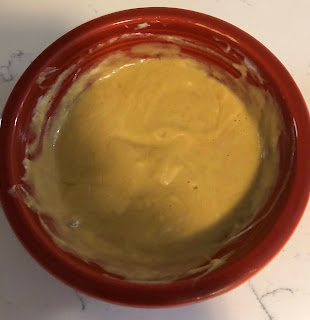 I got salad stuff at the grocery store but forgot to go down the dressing aisle.  And today I wanted salad but definitely did not want to go back to the grocery.  I went to Pinterest & found a Honey Mustard dressing recipe.  3 ingredients, a tad too sweet (but adjustable) & pretty tastes really good.  My salad was yummy

It's pretty too.  😄  (Even though the picture is not great)

I tried to take a prettier one but it did not get any better.  It's ok...it's food, not art.

Oh, and I had to use my expensive, farmer's market honey because I could not find my little honey bear.

- May 01, 2022 No comments:
Email ThisBlogThis!Share to TwitterShare to FacebookShare to Pinterest
Newer Posts Older Posts Home
Subscribe to: Posts (Atom)