I did a post on September 4, 2022  on the movie about Elvis & talked a lot about him then.  But things have come up again because this week his only child, Lisa Marie died at age 54 of a heart attack, which killed Elvis at 42 & his mom at 46.  A sad situation.

Lisa seemed to live a complicated life.  She not only lived in the shadow of her dad, arguably the most famous singer of all time.  She was 4 when her parents divorced, 9 when when Elvis died. I can't even imagine. And she quit school during her junior year of high school.  She had a drug problem for a few years.  She had a low level music career of her own. She was married 4x, including Michael Jackson & Nicholas Cage, both with issues of their own. She joined the Hollywood cult called Scientology.  She had 4 children, 2 of which are teenage girls.  She lost one son to suicide a couple of years ago.  I think for all of her very priviledged life & boatloads of money by looking at her, it never appeared she was a happy woman. It seems to me that maybe she had so much heartache that maybe it couldn't go on.

Friend & I were talking about if despair & depression was hereditry.  Because Elvis' twin brother had died at birth & then he was drafted, his mom was worried about losing her son & became an alcoholic. And Elvis' issues were well known...depression & drugs led to his early death.  And again, I never saw Lisa Marie as a happy person (though certainly no expert here) & can only imagine there were some depression issues. And her son apparently, sadly, had issues too.  Just something to ponder. 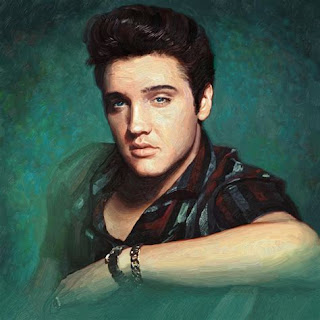 - January 14, 2023
Email ThisBlogThis!Share to TwitterShare to FacebookShare to Pinterest