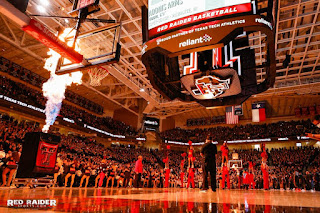 We kind of have to start at the beginning...

In 2016, Tubby Smith left the job as the Texas Tech men's basketball & the University hired former Chris Beard from a job he'd just accepted at UNLV 2 weeks earlier.  He'd been an assistant at Tech under Bob Knight.  He accepted immediately, saying he was "coming home to mama".  He was excited.  We were excited.  He brought an energy to the program we had not seen in awhile.  And he took Tubby's team & added some transfers & the team did well.  In fact, in 2019, our Red Raiders suprised the world and went to the final game in March Madness.  We should have won but Beard was outcoached & we lost by 8 in overtime.   It broke my heart.   But...Beard signed a new 5 year contract & our future looked bright.

Covid seasons don't count.  The next 2 seasons were a wash for the entire world.

Fast forward to April of 2021 & the University of Texas, the Evil Empire took Beard to McDonald's in Plainview & poached him for a Big Mac & UT money & he left.  He took most of his staff & one player & badmouthed Tech to recruits & did all kinds of shady things before he left with the intention of burning our program to the ground.  Players looking at uncertainty entered the transfer portal.  Luckily for Tech,  Tech's AD looked at the perfect Head Coach candidate, the guy who did not "get on the plane" & follow Beard to Austin--Mark Adams.  Adams was the defensive coordinator for all the winning years & along with Sean Sutton & maybe another coach or 2, took over the team.  And Lubbock went crazy.  Adams was a Tech grad & the perfect man for the job.  And just as fast, most of the players jumped back out of the transfer portal & put their faith in Adams.  And it has paid off big time.  He has a great team that just keeps getting better & better & they are on a roll.

So, last night...UT came to town.  The first trip back to Lubbock for Beard.  The excitement was electric. The crowd was hostile but in a respectful way for a Tech crowd, traditionally kind of an asshole-y crowd.  And the team came through.  Great win.  And thank goodness because if they'd lost, the entire University would have looked foolish.

Next time for UT is in Austin on February 19.  And Tech fans have bought most of the tickets.  We need another win to make this season great.  Don't get me wrong...it's not enough....we want more but beating UT twice in one season with the last game in their house full of Tech fans would be at least some icing on the cake.  We want more though...sprinkles & sparklers too later in the season.  But last night was good.

- February 02, 2022
Email ThisBlogThis!Share to TwitterShare to FacebookShare to Pinterest