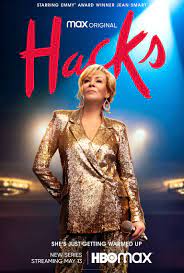 As previously discussed, I have a ton of streaming channels.  So I've been trying to watch more & I've found some good things.

HBO Max has a show called 'Hacks'.  It's a story of a Las Vegas comedy headliner named Deborah, whose boss at the casino wants to push her out for someone who will bring in a younger crowd. Deborah's agent sets her up with Ava, a generation z-er comedy writer being cancelled for a stupid tweet.  Deborah reluctantly agrees to work with Ava even though they don't see eye to eye on much. The story follows their relationship.

Deborah is a tough old broad (a title she's earned) who will do whatever she needs to to keep her show, including blackmailing her boss.  She is a LV staple with friends & enemies on every corner & she knows lots of secrets.

Marcus is Deborah's business manager who keeps her busy with endorsements & grand openings. He's protective of Deborah for real but has his own agenda to get ahead & get rich.

Deborah also has a daughter in recovery, DJ, who resents her mom & her childhood.  DJ goes as far as notifying the paparazzi about Deborah's whereabouts.

Deborah is played by the brilliant Jean Smart.  First known (to me anyway) as the adorable Charlene on 'Designing Women'.  But from there, she is in a bunch of TV shows & movies & steals every one of them.  Smart, beautiful, likable & appearing approachable.  Deborah has those qualities too but also an edge honed by a husband who left her for her sister & working for years in a business that is predominatly male & having to put up with grab ass (in many ways) to get ahead.  Now she's approaching 2500 shows & being pushed out.  She's not going down without a fight.  This is a great role.

Ava's goal was to be a comedy writer & moves to Las Vegas to help Deborah punch up her act.  She thinks she belongs only in Los Angeles, supports her parents financially but does not appear to like them & doesn't seem to have any friends.  She's unlikable to me on every turn.  She will never have Deborah's talent.  And she lives in a drug enhanced, snowflake world where she has opinions on life & Deborah that she will never understand.  I don't like the character at all & I might not like the actress although it's hard to say because I don't think I've ever seen her before.

The ending indicates the hope of a season 2.  No info yet.

Jean Smart won awards for this role. I wonder if a lot of voters could relate to her character more than they'd admit to.

- March 08, 2022
Email ThisBlogThis!Share to TwitterShare to FacebookShare to Pinterest