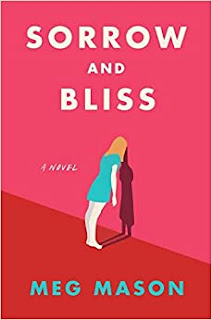 I found the book 'Sorrow & Bliss' by Meg Mason after reading a post on an Instagram account called 'LoneStarWords'.  The writer lives in the DFW area (thus the Lone Star) & she reviews books & has followers who review books. As a reader, I sometimes find myself in a rut, reading the same authors.  This book was well reviewed & the library had it so her we are.

'Sorrow & Bliss' is about Martha, the daughter of a one hit wonder father-poet & a drunken mother-sculptor.  She has a sister Ingrid, married to Hamish & eventual mother of 4.  Martha is basically aimless...goes through a series of menial jobs, doing some writing.  She has a fairly funny view of her life & the life of her family.  But as an early age, she begins to show signs of a mental illness. We see her through 2 marriages & even if she's funny, she's mostly self absorbed & cruel to everyone around her.  Her mom & her 2nd husband Patrick take the brunt of her illness.  After Patrick has finally had enough & leaves her she is diagnosed & receives meds that make things better.  But she's still bitter against him for being weak & not figuring out what is wrong with her & thinks HE should apologize.  It takes her mom & sister telling her she's too much work & annolying before she ends up getting her stuff together.  For some reason that I will never understand, she is even seeing poor domestic abuse survivor Patrick again.  The ending is rushed (although the story is too long) & she gets amazingly cured pretty quickly.  I mean, 20 years of suffering, then one trip to a psychiatrist who diagnoses her with "___ "(qouting the book) & provides her a pill that fix everything.  Easy Peasy. But while Martha may feel clear inside, she is still a horrible person & I guess family feels obligated to care about her.  I'm not sure why anyone cares about her, especially Patrick. In his case, I'm thinking Stockholm syndrome or PTSD. The fact that he would take her back pisses me off & they are both fictional characters.  I'd be hard pressed to find a fictional character I cared less about while reading about them.

An odd thing about the book is that the mental illness is never named.  In fact, at the end it says:

"The medical symptons described in the novel are not consistant with a genuine medical illness. The portrayal of treatment, medication & doctor's advice is wholly fictional."

Lots of people & reviews talk about the book discussing mental illnesses & mental health, which is  a big old deal these days.  But then to make something up? And then "fix" it so quickly with ONE trip to miracle doctor?  From reading the Amazon reviews, some people think this is real.

I finished it because I don't like not finishing a book but I'll avoid the author in the future.

And don't believe everything you read.

- March 26, 2022
Email ThisBlogThis!Share to TwitterShare to FacebookShare to Pinterest