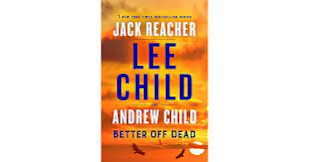 Ok, where to start.

Jack Reacher is a character created by a writer named Lee Child, whose real name is James Grant.   He wrote 23 books.  I didn't count them, I just Googled.

I've written before about Reacher although I've changed blogs so I'm not sure if it's here.  Reacher is basically a homeless ex-military policeman who travels place to place in the US getting into trouble, much of it of his own making.  He has a sense of justice, I guess but not much conscience.  I think he normally sets out to right wrongs but sometimes the line is a little fuzzy.

Reacher is described as mid 30s (hasn't aged in 25 books...wait for it), 6'4", 250.  He's obsessed with guns & jazz music & the fact that he has no home, just an expired passport for ID, no cell phone, no ties to anyone. We introduced to his mom in one book but she immediately died & his brother Joe was around for a couple I think.  But that's it.  And his books end up with a lot of bodies.  He has no compunction about killing people he thinks should die & really likes beating up 4 people at a time & describing it blow by blow.  His obsession with guns tends to get a little boring with the mansplaining about gun barrels & velocity & crap.  I tent to tune out.

So two books ago, Lee/James decided to retire & hand his character Reacher over to his younger brother Andrew Grant who goes by Andrew Child for these books. Lee's name is still in the big letters & I'm sure there is an outline between them with Andrew doing the actual writing.  And frankly, it was time.  Reacher was getting a little stale.  And Lee, a Brit, was pretty good with Americanisms but still had people ordering marmalade & saying things like "I met a girl called June".  And he was averaging about 12 bodies per book with no explanation what happened after he caught the Greyhound out of town.  And worst of all, he'd taken a lean towards anti-military & snowflakeness that I didn't like.  As an ex-military, I don't expect him to go down the street waiving a flag but I also don't agree with Reacher being ok with anti-war protesters protecting AWOL soldiers (See Hope & Despair).  It was just a turnaround of the character that was a reflection of the politics of today.

I'd read the first Andrew book & found it a little ...sleepy while there were still bodies everywhere.  The story had Lee written all over it though it had Andrew too.  After reading it in 2020 I thought maybe I was done with the author.  But the new book came out in October & I had it on my Ebook waiting list & it came open this week so I read it.  And I'm not sure...

The story is set in Arizona where Reacher comes across a woman being followed by bad guys.  She's kinda badass & holds her own for awile.  She's looking for her brother who builds bombs.  She's eventually kidnapped by the bad guys & Reacher sets out to save her.  The story is pretty convoluted.  The focus changes from guns to chemical weapons that now have to be mansplained & I zoned out on them too.  Reacher still has no sense of humor, which I guess is to be expected if you're discussing chemical weapons.  I don't expect character development but there are a couple of women that trust him with all their secrets & I'm not sure why.  I guess I'd have to be there.  And there still pages & pages of fight scenes & beating up 4 people at a time & dead bodies that no one explains.  The book was shorter than normal which is a good thing because Lee could be a little wordy.  I don't think I hated it but it was better than the last book.  They publish once a year so I'll probably read the next one next year.  Makes me glad I have free Ebook though.  I sure wouldn't buy them.

Just a funny aside, the woman he first meets has a prosthetic leg, the result of an explosion.  Not funny itself of course but the last few books I've read by Robert Galbraith have the hero Cormoran Strike, a man with a prosthetic leg that is another character in the books.  I wrote about it more in a previous post on the book 'Lethal White'.    Just a strange coincidence.  Everyone has to be represented I guess.

I looked at the last published of the Robert Galbraith books today as the possible next book but the reviews are horrible.  Complaints mostly about the rambling & the length of the book which shows on ebook to be tottering around 1100 pages.  Even my friend Linda who is reading it now says it's "the wordiest book I've ever read".  And she had another 300 pages to go.  And Amazon reviews pretty much say it travels too far off the main story "whatever it's supposed to be".  So I think I'm going to skip that book altogether.   I have a new murder mystery on deck but decided I needed something lighter so I found a book called 'I Hate,I Bake And I Don't Date, a promised romancey thing that does not have any dead bodies & where I'm assuming everyone has both legs.

- January 27, 2022
Email ThisBlogThis!Share to TwitterShare to FacebookShare to Pinterest