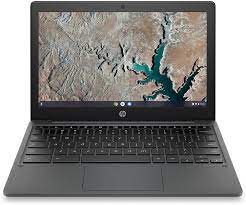 My old laptop, which is only about 4 years old, is in the process of dying.  It's been slow for awhile.  Every time I close the lid it goes to sleep & I have to restart it to get it going again.  Then it started getting weird where I had to push enter several times before it would do anything.  Then the sound was going.  And yesterday I got a black screen with strange computer writing & it took awhile to restart.  And today at 230 pm the computer said it was 1207pm.  So being the bright girl that I am, I figured there was a problem.

I have a monitoring service that an old employer had provided because her son owned a computer repair & monitoring company.  I actually didn't realize I still had it.  I could take the laptop to the son but it would cost me & we've had it repaired before.  Basically, I think the computer was a little bit of a lemon.

So I decided to look around today to see about a new computer.  I decided on a Chromebook, which I'm working on right now.  It's smaller than my old computer which wasn't very big.  There are a couple of things that are different that I'm having to get used to.  Basically, from all I've read, the new computer doesn't have a lot of memory but that's ok because I can't really add anything to it.  Everything is saved on the Google cloud.  I don't like depending on a company for my stuff but the truth is my pictures are on their cloud already.  And I use Google drive for what few files I have.  I still have some old real estate files & my checkbook but they were already on the drive.   Nothing is really going to change except this computer is already a lot faster.  And there is no off button so it may be that it's just on all the time.  Guess I'll find out in the morning.  There are oddly very few choices on the computer & I don't hate that.  The only thing that I don't like is that the font was really small & it appears on every page/app I'm going to need to change it to a larger font.  I changed Twitter & every time I've gone back in since it's still there.  I wish there was a way to just make things bigger.   But I'll eventually get it all done because there aren't so many.

Happy so far.  Excited to see how things work.

Oh, and I got it at Costco for $120 off plus they add another year to the one year warranty.  I do love a good deal.

- January 17, 2022
Email ThisBlogThis!Share to TwitterShare to FacebookShare to Pinterest