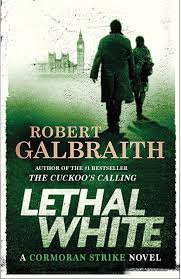 This is book 4 of the Cormoran Strike Series by Robert Galbraith.  Strike is a London PI who ends up with big & pretty interesting characters.  Since book one, he has an assistant turned partner, Robin & a finally a couple of other part time employees & is actually making a little money. He still lives in a hovel above his hovel office but he's not there much so we don't worry too much about him.  The other co-star of the book is his war injured, prosthetic leg, which every time he refers to it, & it's every other page, uses both words.  Like when his leg hurts, we 4 book by now readers, don't know it's a PROSTHETIC LEG.

Our story starts one way with a mentally ill man coming in to talk about a murder he saw as a child & then turns into a fairly interesting story of blackmail, class conflicts, politics & eventually murder.  It ends up with a messy, unsatisfying ending that makes little sense but at 767 pages, someone decided it had to end.  I can't guarantee it but I'm not sure there was a plan for an ending. It might still be going if someone had not pulled the plug.

The story is so named because a Lethal White is a rare, beautiful white horse born with a compromised digestive system that kills it before it can thrive.  The rich people in the book are all horsey people.

As I've pointed out before, the author Robert Galbraith is actually JK Rowling.  And as Harry Potter went on, her books got longer & longer.  I have not downloaded the 5th book yet but I'm scared of the length.  If she did not have more money than the Queen, I'd thinks she was getting paid by the word.  She does, however need a good editor.  But she has a 6th book on the way & I'll for sure finish with the series.  She's a good writer, even if she is longwinded.

I signed up last week for Kindle Unlimited trial which is an Amazon product that for $10 a month I can read unlimited books.  No waiting.  But it's not unlimited because they have a fairly limited library.  Almost anything I've looked for is "not available in this format" although I could buy a Kindle book, which of course defeats the purpose.  I have the trial for 2 months but I don't see me renewing.  I went looking for a light read because my past few books have been murder mysteries.  I wanted a sweet, romancy book where people stay alive through the entire book.  I went back & found a book I enjoyed & the author has written several but they are "not available in this format".  I've been e-booking but there is a waiting list at the e-libarary so I may have to go to the actual libary & get an actual book. The library is just down the street...so easy peasy.  I do know I'm to cheap to buy books anymore, mostly.  It has to be special to purchase it.

I did Kindle download another in a murder mystery series (which is why I got the trial...the waiting list on library e-site was 20 weeks) but I'll probably not start it til tomorrow.

- January 23, 2022
Email ThisBlogThis!Share to TwitterShare to FacebookShare to Pinterest