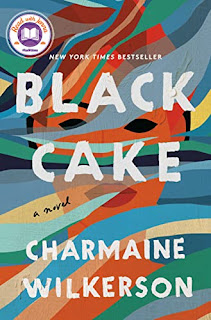 This book is another recommendation of the book blog on Instagram & another that I read sight unseen...no clue what it was about before I started it.  It got good reviews.  And it's kind of fun to be surprised.  But after  the last 2, I'm thinking I might need to at least read the back of the book.

The book starts with teenagers Covey & Gibbs in an unnamed Carribean island.  There is a lot of focus on swimming & surfing & being teens but as the book goes on it's clear it's filler.  After Gibbs goes to London to college, Covey's no accound dad sells her to marry a gangster to settle debts.  Luckily she escapes after the groom drops dead at the wedding.  She runs to London to find Gibbs.  Somehow they don't reconnect til years later. But they have to live life in secret because someone from their small island might recognize them in London, a city of 7.8 people in 1965 & we know that happens all the time.

Later they end up in California under assumed names & lead a relatively happy life with 2 selfish, self centered children.  After the death of both parents, the truth comes out and there is an older sister that even dad did not know about.  And apparently I'm wrong...after hiring a investigator to research the baby she was forced to give up to adoption by the English government, all it took was one look at a picture on the internet & all the sister mysteries were solved.  Hell, it works on Maury!!  At the end, they all ate black cake, full of fruit & booze, the continuity of the book.

I've become more convinced that writing a book must be a joint of effort of a writer who has a good idea & an editor making them add stuff so the book fits in a mold.  Just add 125 more pages!!  Filler, filler, filler.  It doesn't matter if adds to the story.  It doesn't matter if it makes the reader want to pull her hair out because they've come this far & want to see what happens at the end.  Luckily here, it was easy to skim to the end.  And we did find out who the murderer was.

Oh, and lets add a little diversity of racial profiling in the last quarter of the book because where does it go if it's not woke?

Sorry, Charmaine Wilkerson.  You tell a good story.  I hope you get to a place in your career where you don't have to pad your book because it was walking on it's own legs, til it wasn't.

- June 26, 2022
Email ThisBlogThis!Share to TwitterShare to FacebookShare to Pinterest