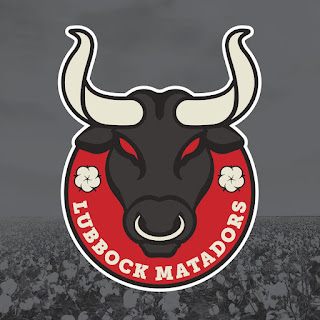 Yes America, it's true.  I went to a soccer game.

Lubbock has a professional team called the Lubbock Matadors. I don't necessarily understand soccer.  I know the point of the game is to get the ball  into the goal.  There is lots of running.  The clock goes up instead of down.  I've seen parts of World Cup matches where no one tries to score because scoring would put them in a different bracket & that is a mentality I don't get.  Who doesn't try to win?  😱  But it was a beautiful night in Lubbock & I decided to go.  I'd looked before & thought the tickets were really high but now I see that I was looking at the season ticket rate.  The game waas only $10.   I met a person I'd met from Twitter before out there & sat with her & her daughter.  And as a competitive person I always like a good game even if I don't get the rules.  The final score was 1-1.

The team has some ardent fans & I love seeing it.  They have a group called the Mozos who march in before the game with flags & drums & they have a guy with a bullhorn who leads chants through the games.

The team has one more game left & I'm planning on going.  It was fun!

Before the game they have a tailgate alley spot & Lubbock Police had fancy Camaro cars with their lights on.  I got to sit inside (on my own volition) & ask questions about the functions of the computer in the car.  Officer Hernandez, a spring chicken who smelled good, would not let me drive.  😏

- June 26, 2022
Email ThisBlogThis!Share to TwitterShare to FacebookShare to Pinterest