The current bane of my existance... 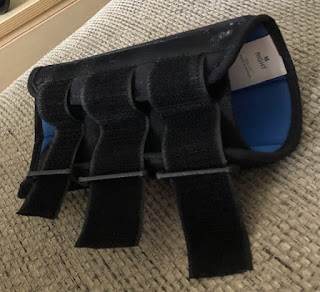 On May 21, I was walking to Walgreens to get pistachios for my lunch salad & tripped on bowed sidewalk & fell on my wrist.  I didn't make it to Walgreens but did manage to make it back home & then drove myself to a neigborhood doc in a box urgent care center.  They took xrays & the doctor came in & said "Yep, it's cracked but it will heal on it's own".   They treated my bloody & skinned knees & gave me the horrible monstrosity above.  And he told me to see a orthopedic guy.  But me, being cheap me, figured if it was supposed to heal on it's own, why spend the money?

So about 3 weeks later I had a regular appointment with my regular doctor & I showed her the xray info to see if she could tell me where the break was so I could monitor the pain.  Frankly, she flipped out, said she was not an orthopedic person & sent me for another xray  & sent me to the orthopedic guy in her office.  When I saw him, he told me where the break was & that if I'd seen him immediately he would have done surgery.  Not exactly the blow off diagnosis I got from the first doctor.   But he also said it was healing well & should be fine & prescribed hand therapy.

The bad news about the physical therapy was the 2 hand specialists were headed to vacation for the next 2 weeks. I had one appointment & PT Mack gave me some water therapy exercises & told me to stretch it.  Then we have another appointment next week.   The therapy seems to be working & things are definitely better but while I think the break is healed, the other side of my arm hurts with soft tissue damage. And I"ve been faithful with the brace although I have it off now.  I'm under the impression that moving the hand is better than it just being stable when the break is all but healed.  And I'm not using muscles anywhere near the break typing here.  But I'm mostly wearing the brace & I can't wait til the doctor says it's all healed & I can toss it.

- June 28, 2022
Email ThisBlogThis!Share to TwitterShare to FacebookShare to Pinterest