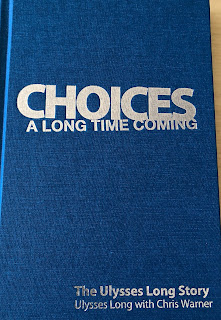 Last November, my friend Linda & I went to Panama Beach Florida & had a great time.  While there, Linda found an indy bookstore in Rosemary Beach called The Hidden Lantern, a beautiful store.  And out front on that day they had an author named Chris Warner signing his books.  I've pointed out before I have an inability to pass up authors out signing books & this was no different.  So I bought a book that I can't say I'd have even looked at off a shelf.

The book is about a black man from a New Orleans named Ulyssys Long.  His life started off good.  High school grad, Air Force vet, New Orleans police officer for awhile.  Some off duty incidents cost him his badge & a drunken evening out with friends ended with them robbing a convenience store.  He was quickly caught & sentenced to 30 years in jail.  In addition to his crime, he took responsability for a robbery his brother ccommitted in order to keep his brother out of jail.   Later, brother joins him in jail.

The story takes Long through several aspects of the Louisiana.  Because of good behavior & attitude, he had several jobs in jail & got a lot of opportunities.  He says he was known in prison to stick up for others,teaching others to read & write & generally trying to make the prison life a little easier.  He was recommended for parole but says the only way to get it is to pay money to the governor & he didn't have money.

He has lots of anecdotes & glimpses into prison life that are fairly interesting.

Several years into his sentence he was in a program that granted some work release.  During this time, a dress shop in Baton Rouge was robbed & Ulyssys was identified as the culprit.  He knew who did the robbery but he was convicted & had 100 more years added to his sentence.   Eventually, he made contact with LSU head basketball coach who went to bat with him & was eventually paroled.  He went on to become a motivational speaker & his platform was about making good choices.

I'm not sure I truthfully believe everything I read.  Long portrays himself as a hero in every situation & believes he's a saint who made a bad choice.   It was interesting & I'm glad I read it but I have some doubts about it being 100% true.

I'm confused about the authorship of this book.  The book says "Ulysses Long with Chris Warner".  The book appears to be first person & frankly the writing is pretty amateurish so I think Long wrote it.  Not sure if Warner was just a consultant or a ghost writer or what.  I actually emailed him off his website to ask.  I also had to ask if that funky crooked graphic on the cover was on purpose of a mistake.  And if "Long time coming" was a play on words.  I have an inquiring mind.

- April 24, 2022
Email ThisBlogThis!Share to TwitterShare to FacebookShare to Pinterest