I met Hope & Ron in Las Vegas last Sunday.  We had not been since 2020 & I had not seen them in over a year.  It was going to be just Hope & me but Ron took time off from work so the upside of that was I got my own room instead of sharing with Hope.  And she had free rooms, my favorite price.  We stayed at Bally's & it was nice.  I'd been inside there before but had never stayed or played there.

I'd wanted to see a show but everything was dark because Sunday was Easter & I guess everyone took the week off.  I would love to see Barry Manilow, although I'm not sure I'd force Hope & Ron to become Fanilows.  I would have been find going alone but nada this week. We mostly gambled, ate & walked.  Nothing spectacular.

Sunday night, playing Pai Gow poker I did really well.  I hit 2 hands that won $1000 dollars.  The rest of the week was up & down & I came home with money which is not always the case.

I had the most fun playing at Tropicana where we had a great table.  Met Scott & Karen from Iowa & played with them for a couple of days.  Mostly I meet nice people at tables.  Never a lot of money involved so no one is too crazy  We are just there to play cards & drink for free, although I don't really drink.

I did have a couple of interesting tablemates.   At Ballys, a lady sat down holding 2 teddy bears, about 12" tall.  I've seen trinkets before...lucky charms, trolls...but never 2 teddys.  But...um..ok.  Then she began to talk to them.  And kiss them on the head. And worry if one of them got bumped against the table.  Just strange.  She was younger than me...probably mid 50s.  And then she told us she was an attorney in Houston.  And now I have questions.  Not to her, of course.  Clearly she has issues. But does she meet clients with the bears?  Do they go to court or maybe to bear day care.

Young woman from Australia had won a trip from a random call from a radio station.  She'd won trip for 2, hotel & Adele tickets but Adele had cancelled.  But the friends were having a good time.

And on a different Tropicana table, we had 2 guys from Cleveland & they were discussing the Baker Mayfield & DeShaun Watson situation.  Cleveland obviously wants Mayfield gone & they offered contract to Watson, who has sat out playing because of legal issues.  Something like 20 women have accused him of sexual assault.  He will not be charged criminally but I'd be surprised there aren't personal lawsuits pending.    At the table, we were discussing the trade & whether the allegations should matter.  My opinion, and that of they guys at the table  it that it does matter.  Morals matter.  Other woman at the table thinks that if there is no conviction it doesn't matter.  Then she said we can't expect morals in NBA & NFL & I have to admit I was shocked by her opinion as another woman.  Just because it can't be proven legally does not mean it didn't happen.  And one accusation from a disgruntled girlfriend is one thing but 20+ reports is really disturbing.

And then there was "Bitchy Tim" from California, of course..  We had been playing for awhile with his partner Robert, a nice guy.  I was sitting by him & then the seat on the other side of me came open & Tim sat down.  From the minute he sat we could tell he was trouble.  He snapped at Robert about something on the table & jumped down his throat.  And he was masked.  We were talking about being happy that the mask mandate on planes had been lifted.  And Tim went off on us about how masks work & that covid was still around & mandate should not have been lifted & we were all going to die.  We all just rolled our eyes.  Stupid talk from a guy in a superspreader city, in a casino, sitting at a table with 6 unmasked players.  Robert & his mom (sitting on her walker behind us, reading her book) were unmasked too.  Bitchy Tim was pretty much a buzz kill for our table & Robert can do waaaaay better!!

On Tuesday we went to tour the Ethel M candy factory but that was a dud.  They are owned my Mars company & had made Snickers bars & Dove candies that morning but by the time we go there they were just cleaning up.  Not all that interesting.

And then we headed out of town to a ghost town I'd seen on the internet called Nelson.  It is an abandoned gold mine town, active from 1858 til 1945,  about 30 minutes from Las Vegas.  Some original buildings remain & collections of old cars & coke cases & basic junk.  Not sure exactly but appeared a family owns land now & they do a tour & if you just want to walk around it was $1 a head.  Got some great pictures & it was a nice walk & time away from the casino. 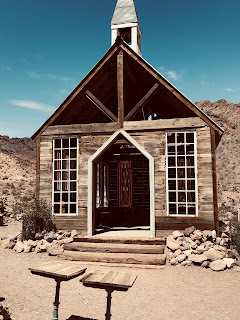 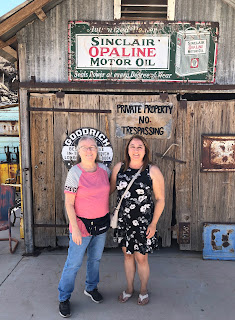 Hope & Ron were good sports doing the dud candy tour & the ghost town.  They were my idea.

And why didn't I think of this?  I could be rich!! 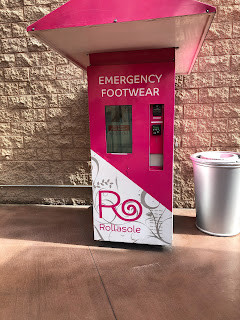 Oh, and on our last day we had lunch at Gordon Ramsey's Fish & Chips.  It was yummy.I'm not a good traveler.  I like being places, for a while, but am always ready to be home.  But I don't like getting places.  Probably years of really bad car sickness.  I have trouble eating & sleeping & sharing a room with another person (luckily, not this trip).  And this trip our plane was 2 hours late so there was a lot of airport time with too many strangers.  And I almost always come home from a trip with fever blisters at least.  I had a bunch of mouth blisters when I got home from Hawaii.  And the fever blisters this time are not horrible but they are painful & it'll take me a week or so to be fully healed.  I know it's nerves & I hate it.   There really is no place like home.

- April 24, 2022
Email ThisBlogThis!Share to TwitterShare to FacebookShare to Pinterest