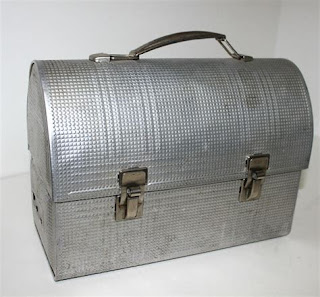 No one reads this but me but for the record my mind sometimes not only goes down the rabbit holes but sometimes into complete outer space.  So follow the train if you can...

I like baking shows & the Brits kind of fascinate me.  I mean, I just did an entire post on it...but it also lead me down another trail.

One of the shows had the bakers make "Bedfordshire Clangers" which are "hand pies".  There is surprisingly little on Google about them but from the show it shows a definition as:

"Clangers are a traditional Bedfordshire Hand Pie. 2/3 savory, 1/3 sweet with a flaky crust".

Basically, it's one long pie with meat & veggies on one end & dessert on the other.  It sounds very efficient.  One guy says he puts one in hs lunch box every day.

For some reason it makes me think of my dad.  He was a cowboy all his life.  The only, short times, that he had a job where he had to be somewhere at a specific time were when he waas in the army in WWII & when he worked in a mine, in Arizona in the 1960s.  And every day, my mom made his lunch to take to work.  It saved money & then of course there was nowhere to go from work anyway.  Mom would put a sandwich & chips & cookie & fruit...or a thermos with soup & corn bread.  And she'd put it in a lunchbox like the one above although Daddy's was a little more beat up.  We used to run to see what was left over when he came home.

As I worked, I went through stages of taking my lunch & eating out.  I certainly would have saved more money eating in.  And as my lunch hour over the years went to 1/2 hour, I ate in more.

When not working at the mine, Daddy would be out sometimes at lunch & in his saddle bag he almost always had a sleeve of saltines & a can of Vienna sausage, or what he called "those little fellows in a can".

- December 03, 2022
Email ThisBlogThis!Share to TwitterShare to FacebookShare to Pinterest