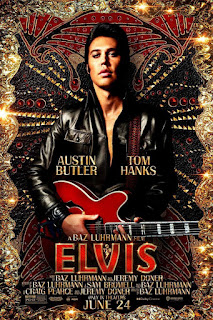 Elvis Presley is a legend and we all know all about his life.   He was born in Tupelo,MS to poor parents.  His twin brother died at birth. He was discovered by Memphis record producer Sam Phillips at Sun Records. He was in the army.  Started dating a 14 year old Priscilla & brought her to live with him when he came back to States, married her when she was 18, baby born 9 months to the day later.  He made mediocre movies & if you believe what you hear, slept with every leading woman while Priscilla waited at home,not sleeping with him til wedding night.  They later divorced, he took drugs & died on a toilet.  It was also clear that all he ever had around him were yes men users who took from him but no one ever took care of him.  He never got over the death of his mother.

I've seen movies & mini-series about his life before but I learned a few things in this theatrical movie.

His manager was Colonel Tom Parker who was a carnival con man who saw Elvis & his talent & saw dollar signs $$.   He convinces Elvis that if he follows him, he can take care of his parents & be a serious movie star.  He cons the parents into signing a contract without an attorney & makes Elvis' dad his business manager.  And signs up for a 50/50 split in earnings.  Over the years, he keeps Elvis under his thumb by making deals behind his back, lying to him & threatening to sue him if he tries to break the deal.  He is a snake who was never a colonel, a Tom or a Parker.  He was a man without a passport who was originally born in the Netherlands though he claimed to be from Virginia.

Tom Hanks plays him in the movie.  He wears a horrible fat suit & has a horrible accent.  I've seen pictures of Col Parker before though I don't remember what he looked like.  They should have lost the fat suit & I'd have just pictured Col Parker as Tom Hanks size.  Poetic license, people!!  The entire performance & look was distracting & not in a good way.  I've never not liked Tom Hanks in a role til now.  Of course, it didn't help that Parker was so horrible.

He'd been threatened with arrest for his "lewd" dancing & could do jail or the army.  I always thought it was just a draft thing.

His mom drank herself to death while he was in the army, worrying she was going to lose her other son. Elvis had bought Graceland & the pink cadillac for her.

Parker did what he had to do to keep Elvis performing.  Lies, drugs to help him sleep, drugs to keep him going. Threats & blackmail.  He even worked forgiveness of his own gambling debts into his last deal. Elvis had wanted to go on a world tour but Parker signed him into a 5 year residency in a Las Vegas showroom. And I thought this was strange...pretty sure I heard this...Elvis wanted to do an international tour but he was committed to the LV residency.  He said he'd never been out of the country except for his time in the army.  But shady & undocumented Parker couldn't leave the country because he was here under an assumed name & had no passport under any name.

Priscilla left him over the drugs, not the other women though she knew about a bunch of them.

One of the final scenes of the movie shows "fat Elvis" who could barely move, singing 'Unchained Melody'.  It's heartbreaking.

The last scene shows headlines of his death.  It was one of those moments where I remember where I was when I heard. I liked his music but I was not a mega fan.  I was in Miami Beach & stepped out of the shower to the news on the radio.  August 16,1977.  I remember sitting on my bed in my robe with wet hair unable to move for a little while.

Austin Butler played Elvis & he did an excellent job although I never saw Elvis in him. I've seen impersonators in Vegas that were more Elvis.  And other than Tom Hanks there was not another person I recognized in the movie.  It was full of Memphis blues music in the sound track & that's not really my thing.  I found the sound chaotic although I've seen a ton of praise for it. Plus run time is 2 hours, 39 minutes.  I was clock watching.  Just not for me.

- September 04, 2022
Email ThisBlogThis!Share to TwitterShare to FacebookShare to Pinterest