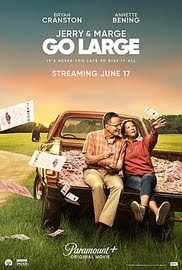 This movie has been out for awhile & I finally watched last night & wish I'd done it sooner!!  What a sweet movie.  And it's based on a true story!!

The movie begins with Jerry, who has worked for Kelloggs for 40+ years or so being forced into retirement because his department has been phased out.  Jerry is a numbers guy...percentages & odds stuff.  He goes home to Marge, his sweet wife of 40+ years & finds himself bored to tears.  Jerry finds a lottery game, that I was never clear on & that has since been discontinued, where he sits down with a napkin & a pen & figures out the odds of winning.  So he takes $6k from their shared checking account & immediately turns it into $16k. He finally tells Marge & I think he was expecting a little pushback but she was all in! They play in Michigan until the game is discontinued so they drive to Massachusetts every 3 weeks to buy tickets at a sad little convenience store run by the adorable Rainn Wilson.  They basically take over his lottery machine & print tickets for days & continue to win. After a big win, Marge suggests they can do good things for their dying small town with the money.  They get the residents to "buy shares in the corporation" & soon everyone is winning!  The story says the corporation made $26 million before the game was finally terminated.

There is a side story of Harvard students discovering the same flaw in the system & some minor conflict between Jerry & the smart ass Harvard kid.  After a meeting with the lottery commission, the smart ass is shut down & dragged home to daddy & loses all his friends who,as Jerry points out, are making money for smart ass with no return for them.

The story also points out that everything they did was fully legal & all taxes were paid.  The corporation appears to still be in business but no one is betting anymore.  Jerry said that maybe he'll buy a Mega Millions ticket now.

- September 15, 2022
Email ThisBlogThis!Share to TwitterShare to FacebookShare to Pinterest