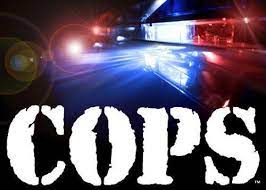 Cops is a TV show that started back in the 1980s, disappeared for awhile & came back.  IMDB says it was still going in 2021 but that surprises me because of all the cop hate & the snowflakes complaining about their rights to have drugs, assault people & burn down buildings were being violated.  Crime is barely crime anymore.

So there is an entire Cops channel on Pluto TV.  I've been watching tonight & one of the shows was with Lubbock police officers.  I used to dispatch, starting 37 years ago & I lasted 4 years.  I don't know any officers anymore because they've all retired & are old like me.  But on this show, I knew 2 of them.  I knew both as rookies.

One I knew pretty well.  RH was the unluckiest officer I've ever met.  He broke his arm in the police academy & had to work on the police desk with us til he healed so we all became friends.   Then he got knocked out with his own flashlight.  And poor guy had many other strange injuries over the years.  And the last time I talked to him, the worst thing ever:  He was the sergeant in internal affairs.  But after a chase, he had to go as a supervisor after the suspect ran into a tree.

I also think of RH because one night I woke up spooked about something, a thing that I don't ever remember happening before of sense.  It was about 3am. I got up, turned on every light in the house & checked all of the closets. I was flipped out. I had not worked at the PD for a couple of years but my friend D was working midnights & I called down there just to hear a friendly voice.  Not sure what I sounded like but I remember her saying "I've never heard  you like this" & she said she was sending someone to look around.  I at first told her no...she'd have to send someone I knew or someone I didn't know.  She finally told me RH was at the hospital finishing a report & I agreed he'd be ok. She called him & he called me right back.  He told me he was on his way & he'd call again when he was on the doorstep.  He looked all around outside & came in & sat with me for a few minutes.  He said, "I've never seen you like this!".  Obviously I was pretty flipped out.  But I lived through it & it's never happened since.  But I'll always appreciate his help.

The other, EH, was a rookie the year I left.  I don't know him well at all & am pretty sure he does not remember me.  But when he was in training, we had a strange encounter.  I was working one night & had cramps really bad & my boss gave me a muscle relaxer that wiped me out in a way I've never felt before.  People were talking to me on the radio & I seriously could not make sense of any of it.  We all decided I needed to go home.  So we got my beat car officer, BH, to drive me home & his trainee EH drove my car home.  They got me in the house & left.  The next afternoon, I woke up & found my front door open (behind unlocked screen door) & my clothes in the hallway leading to my bedroom. I can imagine I watched them leave & went to bed.  I only hope I waited til they were gone before I started losing clothes.  Lesson learned:  Never take muscle relaxers from boss.

I have a love hate relationship with the tv show Cops.  People are strange & I used to enjoy watching the officers doing their jobs & the weirdos they came across.  Now, for some reason, I don't find all of it entertaining.  I like the chases & sometimes chunko cops running after people. And the suspects lying.  Some are pretty entertaining. But what I don't enjoy is the pathetic addicts that need help instead of jail.  I feel bad for the homeless people.  I hate it when there are domestic calls with drunks where there are children everywhere.  I don't like the hoplessness of some of the people they show.   But tonight I'm watching...so there you have it.

- July 15, 2022
Email ThisBlogThis!Share to TwitterShare to FacebookShare to Pinterest