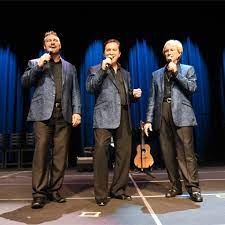 Growing up,  my mom would play a lot of 4 part harmony gospel music & I loved it!  I grew up with the Gaithers, The Stamps Quartet, & The Blackwood Brothers, among others.  They'd go from town to town, performing at small churches.  And many times, the small towns did not have hotels so they'd stay with different church families.  We had a few over the years ...they were happy for a guest room & a good meal or 2.  The groups played for a small stipend & then got to sell their music after the show.  They even sold song books!  We had a few because my mom played the piano at church.  And the cool part was that my mom could not read music.  She'd learned to play by reading "shape notes" & the books had shape notes.  Interestingly, mom learned as a child when a salesman came by with a music program & her mom bought it for her.  Mom wasn't a Chopin but she loved playing her piano & that came through in her music.

I don't necessarily remember any Blackwoods but I'm thinking we probably had at least one since I recognize the name.

Tonight at the Cactus Theater they had a gospel night & Terry Blackwood & the Imperials.  Terry was probably a son of the original Blackwood Brothers & the Imperials were a back up group for Elvis Presley in the late 60s.  Neither of the today Imperials played for Elvis because they are too young.  Terry was an Imperial & did back him up.

They guys sang well together.  No four part harmony gospel because, first, there are only 3 of them.  And I was hoping for more older gospel songs but they were a little more contemporary.  And they're obviously they are on a budget because at intermission & after show they still sell cds themselves. I was possibly the youngest person there & lots of people were buying cds. I wasn't interested in a cd but if I was I no longer have anywhere to even play them anymore.  I just have Alexa...

I wasn't impressed or disappointed.  I just wanted more.

- July 17, 2022
Email ThisBlogThis!Share to TwitterShare to FacebookShare to Pinterest