Living in the Past? 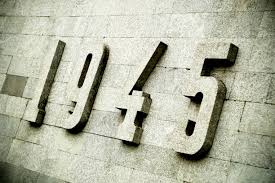 Today was weekly grocery add day.  We get them every Tuesday & I give them a glance before I toss them. I don't give them much notice to be honest. When I decide the dreadful day has arrived...grocery store day...I look at the store website & may put something on the list that has a coupon.  I always wish I had the ability to look for store coupons although they are really old school.  I worked at Walgreens for a couple of months & a woman came in with a huge file & really worked the coupon game to the hilt.  I was waiting for the day when Walgreens owed her money!

So my friend D loves the 1940s.  She's fascinated with her pilot dad & her mom, who was married to first husband for 2 weeks before he was killed in the war.   She met dad at a local airbase.

But my friend is obsessed with all things WWII. I have to admit that I loved that era...heroes coming home, the women's fashions, the strength to rebuild our country after a too long war.  But I don't try to cook with ration stamp recipes.  I can't say I listen to much Benny Goodman.  I can't name every fighter plane. I am obviously not a "historian".

D is also obsessed with grocery prices & saving money.  Every week she scans the ads & plans her entire life around them. But seriously, is saving 25 cents off a jar of pickles going to solve things?  I actually spend not much on groceries, maninly because everything I make last at least (& at most) lasts 2 meals.  For the record, I'm not fond of leftovers.  And a lot of time I eat one meal a day, about 230 in the afternoon.  My friend smokes like a chimney so half of her budget goes for cigarettes.  But (she says sarcastically) don't buy those pickles til they're on sale.

I do like a bargain though but it's only a bargain if it's something I'll use.  I'm thrilled when I find them but I'm realistic.  I only dance a little though.

- July 26, 2022
Email ThisBlogThis!Share to TwitterShare to FacebookShare to Pinterest