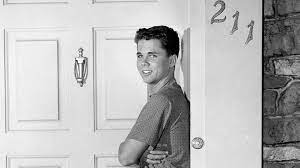 Gosh, it's been a terrible day for news.

Tony Dow is an actor that played on a TV show called 'Leave It To Beaver'  from 1957-1963.  Technically it was before my TV awareness time but it still runs in reruns today.  Dow plays Beaver's older brother Wally.  On the show he went probably from about 10 to about 16.  He was a good looking guy, nice & smart.  He had some bonehead best friends--Eddie Haskell, a legend on his own & Lumpy Rutherford.   As a teen, I had a huge crush on Wally.

Fast forward to now.  He's had cancer a couple of times & announced in May 2022 that it had returned with a vengence.  This morning, it was announced in the media that he had died.  His management team announced.  TMZ, the Networks, lowlife CNN ran with it.

Now we're told he is in his "last hours" per his son.  His stepmom was "distraught" and told the management team.  Interesting.  What a mess.

Anyway we look at the situation it's a sad day.  Another piece of my childhood is gone (or about to be).  He wasn't a guy who did bad things for attention. He served his country. He didn't whine about not getting acting work anymore...he was also a sculptor. Married twice, had one son. He was one of the good guys.  And of course he got older but the picture above is how I'll always see him.  May he rest in Paradise.

- July 26, 2022
Email ThisBlogThis!Share to TwitterShare to FacebookShare to Pinterest