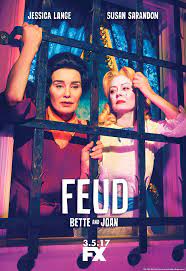 Feud is a TV mini-series about the relationship between movie stars Joan Crawford & Bette Davis. The show is set in the early 1960s when both actresses were in the September of their lives.  Both were big stars in the 1940s & 1950s but by this time their stars were fading.  There were few movies being made calling for stars their age.  Davis had 2 Academy Awards & had been nominated for 8 others. Crawford had 1 Award plus 2 other nominations.

While both were desparately looking for roles, along came 'Whatever Happened to Baby Jane'.  The movie was about a former child star (Davis) who lives with & torments her paraplegic sister (Crawford).  They are assigned the most patient director of all time who has to deal with dueling divas clearly trying to one up each other.  Clearly these women are not friends & they do whatever they can that they think makes them look better & the other look like the problem.  Crawford is clearly the high maintenance of the 2 of them, causing drama & delays & Davis is the more professional who sometimes retaliates out of frustration or spite.

After the movie is done, only Davis gets the Academy Award nomination.  And then Crawford really gets warmed up.  Her shenanigans around Oscar season are epic.

I'm abbreviating because I hate to give to much away...they later try to make another movie that doesn't work out because of even more diva behavior. (Hush,Hush,Sweet Charlotte).  Crawford was replaced by Davis' friend Olivia De Havellind!

One of the best things I've seen in awhile, especially because of the references of old Hollywood.

Joan Crawford won her Oscar for 'Mildred Pierce' a movie I hate above all reason.

I am a Bette Davis fan.  Joan Crawford, not so much.  One of her previous husbands had owned Pepsi & talk about product placement though apparently she hauled a cooler around with her wherever she went.

I don't know if it's true, but Bette appeared to be a good friend to a few people.  Crawford only had friends who could advance her career.

- July 22, 2022
Email ThisBlogThis!Share to TwitterShare to FacebookShare to Pinterest