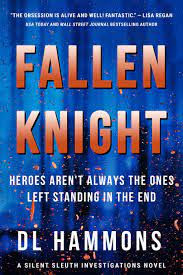 Earlier this year I went to a local indie bookstore (& self publisher company) &  found a book called 'Knight Rise' by a writer named DL Hammons.  I paid too much for it, about $30, a full price for a hardback.  My friend Linda has a subconscious feeling that books purchased at indie bookstores are better & I guess I was channeling her.

The book was pretty good. It introduced us to 5 college friends who reconnect & set out to find an old girlfriend of one of the guys.  It was a fun read & even near the 2nd half when it turned into a political thing I enjoyed it. Along the way, the guys connected with a PI named Dianne who helped them in their quest.  She was fine there.

I even met the author at the local bookstore & he signed my book!

I was happy when his 2nd book 'Fallen Knight' was published.  At the book signing he said it would be out on June 1 but it was delayed til July 29.  The book starts out with a school shooting & a real one happened on May 24. That may have caused the delay.  In the book there is a disclaimer that says it has a school shooting.  I'm sure that was not in the original text.  They may have had to delay to change that.  However, the book description on Amazon says "mass shooting" which should not be different in my mind but it is. I read mystery & suspense reader so I've read a lot of murder scenes.  I'm not sure I'd have bought the book if the description said "school shooting".  Not sure anyone would.

But I read it all & wanted to know what happened & that's on me.  That being said, I did an Amazon review today giving the book 2 stars out of 5.  The fun teasing & banter was gone.  The book got serious quick.  Dianne is now the star of the show with the original guys as back up players.  I'll be honest...I rarely like women protagonists in mystery books.  Not sure why.

And I hate Dianne. Apparently, she was appointed Pope at some point. She keeps secrets from her team. And because of it they regularly get beat up.  She bullies the local cops & the FBI guys working on the shooting.  She doesn't tell them what she knows, goes behind their backs to follow leads she should give to them & if they question her she threatens to go to the press.  She treats them like a bunch of Barney Fifes. And she pulls a stunt near the end where she tricks a suspect into confessing.  It all sounds illegal & I think a legal aide lawyer could get every bit if the discussion thrown out of court & could also get one of buddies disbarred.   Did I mention I hate Dianne?

The writing is really good at some places. The description of the shooting was very well done.  But then there is very juvenile writing too.

I missed they guys.  But if Dianne is in charge I don't think I'll be reading anymore of the books.

I actually think the books were written years ago & the author only recently updated & went the self publishing route & got them out there.  He is a nice man & I wish him luck but I'm done with his Knights.

- August 13, 2022
Email ThisBlogThis!Share to TwitterShare to FacebookShare to Pinterest