I'm not sure it's true 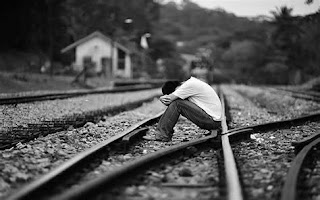 "You are not alone, and this will not last forever."

A couple of times a day some Twitter person posts something like this trying to be inspirational. Because they apparently think that a blurb on social media is going to make all the difference in the world to a person. And I don't know, maybe for someone it will make the big difference. As a person who does not believe in therapy or that any person can make life better, I am not one of those people. I believe the only person who can fix my life is me. Maybe that's because I don't trust anyone...I don't know. I do know that I have walls built up around me that very few people get through. I wish it wasn't that way but it is.

My birthday was 2 weeks ago & my friend J sent me a happy birthday text. I made a small deal of hers...I took her to lunch & got her a Sonic gift card. A small deal. I didn't get a phone call. But she's working now & her sister is here. She sure doesn't need me. But when she needs something, she'll be back.

Everyone comes back when they need something.

My friend D who has been a friend for almost 40 years. She's a good person but very self centered. She lives in a different city & we used to talk every week or so. Her side of the conversation was about herself, her husband & their son & DIL & grands. And that's all the convo was about. She didn't care at all what was going on with me. Last year she had a knee replacement & I called a couple of times a week to check on her & after a couple of weeks she told me that I didn't need to call her anymore, if she wanted to talk to me she'd call me. So I stopped calling. That was about November. Then in February, I was going to Arlington & called to see if they wanted to meet for lunch. Along with another mutual friend, we had lunch. And D Facebook messaged one time after that to get a phone number & I have not heard from her since. So I guess she has not needed to talk to me. No birthday wish. And I should be a bigger person but I'm not. I'm just not. Because I see it's sadly a one way friendship & I don't have the spirit anymore for someone who doesn't want to be there for me. And for the record we don't agree politically but I've never cared. I just figure she's an idiot but just don't discuss politics with her & we are fine. I deleted Facebook, mostly because I think it's toxic, but mostly because I felt like she was stalking me by commenting on anything on my timeline. Why would I follow a brewery? (My cousin owns it, for the record). Who is this person? Don't be mean about Dr Fauci. Why did you say that? I'd done everything short of giving up the entire app to block her from seeing my timeline but nothing worked. I unfollowed her years ago because again, I avoided her political views in a passive-aggressive way. The toxic thing was the main reason for deleting but this situation with D was also a part of it.

So it sounds like I drive people away & it's true. For years I've had acquaintances that were friends when they needed something & were casual friends when they didn't need me. And I'll admit I'm hard on people. I just want more effort after what I give. And I'm not going to settle for people hurting me (even unintentially) anymore. Frankly, I can't handle too much more hurt. I'd rather be alone. And I get my wish. Day in & day out. I'm sounding a little pathetic tonight. I'm lonely. But I'd rather be lonely than hurt.

- August 27, 2022
Email ThisBlogThis!Share to TwitterShare to FacebookShare to Pinterest