The Ballad of Gussie & Clyde 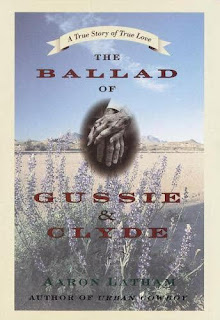 A few weeks ago, I went to my hometown funeral home page to see if anyone I know had died.  It's a little morbid but I look once a month or so.  I'm from a small town so I'm ever curious about everyone's business.  There was an obituary of a man from Spur named Aaron Latham.

Aaron has some fame because he wrote a screenplay for a movie called 'Urban Cowboy' which was a love story between a man named Bud, from Spur,TX, played by John Travolta & Cissy who I don't remember much about, played by Debra Winger.  Not a great movie but it was mostly set in a honky tonk in Houston called Gilleys.  The muic was good.

So Aaron made his fortune & moved away & married a big TV journalist named Lesley Stahl.   They lived in a penthouse in New York City overlooking some museum. And when he died, they brought him home to be buried in Spur.  Odd.

He had written a few other books over the years but I was interested in one called 'The Ballad of Gussie & Clyde'.  It was a story of his dad--Clyde--who married Gussie while both were in their 80s.  They had known each other as children & met up again when both were widowed.  The book is "A True Story of True Love".

I'm from Spur.  I did not know Clyde or Gussie or Aaron but was interested in his story after Aaron's death.  So I found the book on Amazon & finished today.  There was a lot of family history, a lot of familiar locations & some familiar people.  It was a quick & fun read.

There was of course a little embelishment & some errors but I guess it's poetic license.  In spite of NYC snobbery, for instance, I don't know of one cowboy that would wear spurs to church.  And I grew up in a family of cowboys.

The book was as much about Aaron being with sick & dying parents, doubting whether Gussie would stick around (she was born near Spur but had lived in California for years).  And for some reason he was interested in their sex life which I thought was a little TMI.  By the end of the book, published in 1997, Gussie & Clyde were still kicking.

After a stint in the hospital, for a few days Clyde had to go to the Spur nursing home, which Aaron prescribed as "hell".  He told Gussie that he'd pay for 24 hour care but he ended up in the hospital before that was set up.  I was offended by his description of the nursing home.  We sadly had to put my mom there in her later years because my dad could no longer care for her at home & I lived in a different city.  But I didn't have millions to make anything else happen.  It was not a fancy place.  It used to be the Spur Hospital. I was born there.  I'd bet Aaron was born there.  It was an old building but the care & food were adequate.  And in a nursing home sometimes that's all you can ask for.  My mom was cared for by people who'd known her forever & my dad saw here everyday.  There are more ideal place but it wasn't hell.

I have not read any other of Aaron's works.  I'm not sure if this was a typical book.   The book was a 175 page love letter to his dad.  And it was very sweet.  Not sure if was about any other place I'd care but it was a fun & familiar read.

- August 19, 2022
Email ThisBlogThis!Share to TwitterShare to FacebookShare to Pinterest