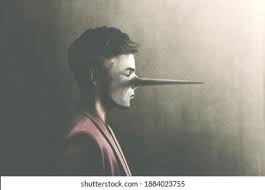 A lady came into the store & she was very talkative.  She told us she'd moved from California after she lost her job & I felt bad for her.  Then as she kept talking, her story became more & more unbelievable.  I believe she lost her job.  The rest? Not so much.

I don't understand the point of lying.  Do people get a little rush when they get sympathy & are then unable to stop?

I have a couple of friends that lie.  One just exaggerates.  I believe she starts off with the truth but then just embelishes to the point of no return.  I just shake my head.

I had a woman I worked with that would stand in front of you & lie.  If the blue table she'd tell you it was red, even if it would benefit her more for the table to be blue.

Everyone wants to be heard.  I know I like to talk & be listened to. And maybe some think they are not interesting enough without the lies.

But's it's kind of annoying.

- August 13, 2022
Email ThisBlogThis!Share to TwitterShare to FacebookShare to Pinterest