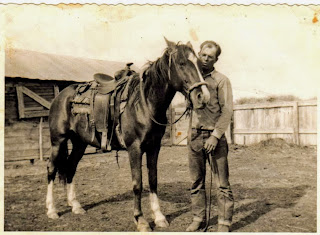 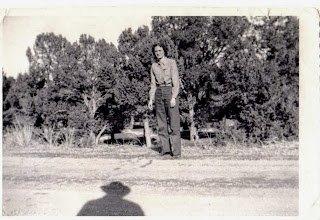 l had a dream last night that had my Aunt Allene & my Uncle Harold in it.  I don't remember the dream part, just them.

Aunt Allene was my Dad's youngest sister.  She was a baby when their dad died.  I didn't know her when she was just a girl but she was mid 30s when I was born but I don't remember her til later of course.  Sometime in the 40s she met Uncle Harold in Arizona.  I don't know the story...that's what my cousin told me.  All I know is Uncle Harold just showed up one day & they connected.  I don't have a lot of info...he thought he was born in New Mexico & was raised in an orphange til he left at about age 10 & went out on his own. He never knew anything about his family.  Can you imagine?

Again, I wish I knew more...Apparently both were odd ducks who met each other & fell in love.  I know that part for sure.  They lived for years in Colorado. They never had any kids. As with several of the men on that side of my family they were cowboys & their jobs came with a house.  It wasn't til later in their lives that my dad or my uncles owned their own houses.  So when they left the job, they had to move.  We did it several times personally.  But Colorado was their lifetime home til Uncle Harold died pretty young.  Then, of course, Aunt Allene had to move.  She moved down with her mother & brother in Texas.  She died at age 55 about a year & an a half after Uncle Harold.  She died of a broken heart.  She'd lost her husband, her home & her will to live.

They were my favorite Aunt & Uncle.  We'd lived in Arizona & they'd come down a couple of times a year for a couple of weeks.  They taught all of us how to play rummy & dominos & were just fun people all together.  I think others in our family were embarrassed by them.  They were common as old shoes.  They were poor & sometimes loud & not capable of putting on aires. They were who they were. And I loved them & missed them dearly.

I called a couple of cousins today to ask about their memories of them & they didn't have many.  They were not as attached as I was. I hate when I have questions & there is no one to ask anymore now that my people are gone.  It makes me sad.

Never had a lot of pictures of them but here they are.  Love how  Uncle's shadow was taking the picture of Aunt.  And Uncle's horse's name was Bud.

- December 08, 2021
Email ThisBlogThis!Share to TwitterShare to FacebookShare to Pinterest