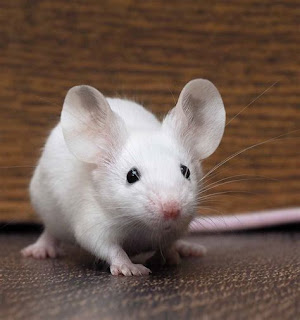 For a little background I've had a mouse this week.  I only saw him once last week, nosediving under the refrigerator.  So I set out my traps...round things with a little door that you put peanut butter in the bottom of.  The dumb mouse is supposed to go in the door to get the peanut butter & the door closes behind him & he's trapped. No hurt up front.  Then I toss the entire thing.  I've had about 4 mice in the last year & a half & they've worked fine.  Til now.

The genius mouse hit the door once but it closed before he got in & scared him off.  He didn't try again.  So it was time for meaner stuff.  I got this poison stuff that goes in a plastic box & the mouse eats it & then eventually dies.  Not what I wanted but I hate a mouse in my house much worse.  So genius mouse has been munching along & I have not seen again.  I was hoping he'd gone to the big mouse house in the sky.

So, this morning, I'm sitting on my couch & felt something on me...& I saw a mouse fly by.  Of course, I was startled...I knocked over my full glass of water & dropped the computer in my lap.  Then after a few minutes to calm down, I moved the trap & went looking.  I pulled the cushions off the couch & found the mouse dead right by the arm.  I watch for a couple of minutes & got a cup towel & hauled the body outside & tossed him over the fence.  I hate to say that for a mouse, he was kind of cute.  But dead was always his fate.

So here is my question.  How could he have run over me & 2 minutes later be dead?  Did I scare him to death?  Heart attack?  Maybe he was weakened by the poison & it didn't take much.  Or more disturbing...is there more than one mouse?  A brother of the original now bent on revenge?  And creepiest of all, if he's bold enough to run over me sitting on the couch would he run over my sleeping body?  I'm probably going to have to take a sleeping pill tonight to calm those fears.

- December 30, 2021
Email ThisBlogThis!Share to TwitterShare to FacebookShare to Pinterest