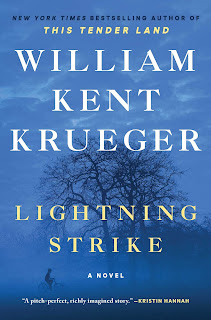 I just finished 'Lightening Strike' by William Kent Krueger.  It is the latest of his books featuring Minnesota Sheriff Corcoran "Cork" O'Connor.  It's actually the first Cork book I've read although I read one of his stand alone books called 'Ordinary Grace' which I reviewed previously.  And loved.

This book was different than the first.  I like police procedurals alot.  The book starts off with newly elected Sheriff Cork remembering one of his father Liam's cases in 1963.  It involves the mysterious death of a Ojibwe Indian in 1963.  Liam is a white man married to Colleen whose mom Dilsey is a full blooded Ojobwe & who's dad was also a white man.  I stress all of this because it's all important to the story.

Also we need to start with the term "Indian" which when I was growing up in Arizona was what the people born on the reservations were called.  They called themselves Indians, had Indian pow-
wows & lived on "Indian time".  This was the same time period the book is set in.  Later in life, after someone convinced them they should be offended, they were called "Native Americans".  Now they are referred to as "indigenous".  Just explaining all of this because I'll refer to them as Indians, the term the author uses.

So...back to the review.   I like the writing alot.  The pace of the story was really good & I was anxious to find out what happened next.  I figured out who the killer was about 2/3 way through although I didn't really know the reason.  It took Liam a little longer.  As a matter of fact, I'm not really sure what lead him to the killer.  He was walking along confused & then apparently some secret thing that the author did not share led him to the truth.  Something turned the light on.  I'm just not sure what.  I tend to think sometimes authors have to reach a word threshold, thus the overlong books with unnecessary scenes.  Then for some reason its time to end the book & poof the wrap up happens without fully explaining how it happens.

And of course being a 2021 book there was quite the focus on racism, victimhood & white supremecy.  The indians had been treated badly, no doubt.  It was shameful.  And I'm sure their mistrust of the white sheriff was justified in some cases.  But the refusal of the people on "the rez" to answer questions & help with the investigation because the "white man" was bad was kind of ridiculous.  Liam's mother-in-law Dilsey was the most unbelievable.  She'd seen a lot and had trust issues but Liam was her son-in-law & the father of her grandson & she was downright hostile.   And to make things worse, any clue Liam had was shared with his family & they told all they knew to anyone who would listen.  A suspicion of a white man doing the murder had half the tribe at his front door demanding an arrest even without evidence or chance of conviction.  And any suspician on the rez ended up with charges of racism & brick walls all around.  And letting his son hunt for clues, at least in 2021, would lead to all kinds of chain of custody issues to start with.  Pretty unprofessional job all around.by the sheriff.

I'm not sure I'll read another in the series.  I won't for a while.  Not sure I can explain why...good writing, somewhat unbelievable story.

- December 02, 2021
Email ThisBlogThis!Share to TwitterShare to FacebookShare to Pinterest