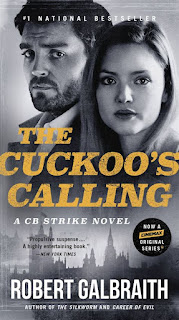 I just finished a book called 'The Cuckoo's Calling' by author Robert Galbraith.  It's a mystery (my favorites) about a high end model who allegedly committed suicide but her brother thinks she was killed instead.  He hires an old friend of his deceased brother, down & out private detective Cormoran Strike to investigate the death. Poor Strike has been dumped by his girl, is living in his office & broke as a joke so he agrees to take the case.

Strike is an military police vet who had the bottom of his leg blown off in Afghanistan.  After his injury, he left the army.  And his father is a famous rock star who barely acknowledges him.

As he begins the investigation, it takes him into a world of the rich & famous...movie producers, fashion designers, rock stars, Lula's (the model) disfunctional family.  And along for the ride is a temp secretary that he can't afford named Robin who has secretly always wanted to be a private eye.   Strike ends up interviewing everyone in Lula's life & he and Robin figure out what happened.

The writing in phenomenal which is not really a surprise because Robert Galbraith is a pen name of JK Rowling, the author of the Harry Potter books.  She is cancelled now because she had the nerve to have an opinion on transgender people & spoke it out loud so everyone hates her.  I don't agree with her comments but the woman knows how to write a good book that makes you want to keep reading.  When she first started shopping around Harry Potter she had to hide her identity because her handlers thought (correctly, as it turns out) that no one would want Harry if they knew a woman wrote the books. And now she has more money than the Queen.  But I am disturbed that she is writing this series (5 books so far) under a man's name.  And they started in 2013, before the transgender deal.  I can understand a pen name but I don't understand why she has to write as a man unless she's under the impression that mystery books about male private investigators should be written by men.  It's baffling.

Here is a paraphrase part of book that is so true..."People liked to talk; there are very few exceptions;  the question was how you made them do it. Some were amenable to alcohol; others like the spotlight; and then there were those that merely needed proximity to another conscious human being",  The last one, when you're lonely is so true.  The last one is me.

- December 13, 2021
Email ThisBlogThis!Share to TwitterShare to FacebookShare to Pinterest