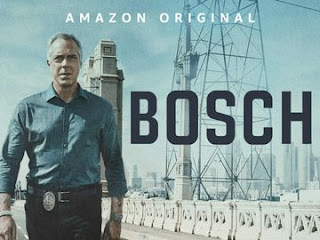 I've been binging a TV series called 'Bosch' about Hollywood Homicide detective Harry Bosch, based on a character created by Michael Connelly. Harry is played by Titus Welliver, an actor I've seen but cannot tell you where without looking up & it's not that important.

Harry grew up in foster care after his prostitute mother was murdered & no mention of dad. He has an ex-wife who is a poker player/former FBI agent & they have an annoying & unnecessary daughter that I'd like to see in college. In Connecticut. His co-workers are long time cops Lt. Billips (a non-ball busting bitch, rare in cop books), partner Jerry Edgar (J. Edgar), collegues 'Crate & Barrel', Santiago Robertson & a few passers-thru & Chief Irving whose life crosses a lot with Bosch's.
The cases are interesting & take a 10 show arc to solve. Lots of twists & turns & strangers & I have to sometimes scroll back to see what's going on. Bosch is looked on by everyone as sketchy in some of the things he does but he gets results so everyone seems to kiss his ass. And apparently he knows where all of the bodies are buried, sometimes literally. And the under thread of the entire show (so far) is he investigates the murder of his mom 30 years earlier. I find him a way less than likable character that I probably wouldn't care much for in real life. Aside, my biggest problem with the series is production related....I spend half my time with my finger on the volume button. If I raise volume to hear dialogue, the music, sirens & way too much shooting blow me out of my chair. I'll blame it on show & not my getting old hearing.
The odd thing is, I know a Bosch cop. I used to be a dispatcher & had a desk sergeant who came from street/burglary team & if he broke a rule or 2, it was for a good cause. That is what they portray Bosch as doing. I liked my Sgt H, a man who did not do it for praise, (although he did have a big ego) but I truly think he thought if he took burglars off the street then no one would break into my house. And I'll defend that with all my heart. He was a good guy, a smart guy & seemed to be a little bullet proof (a turn of a phrase because oddly he'd actually been shot early in his career). And like Bosch, he was sometimes seen as reckless & a liability to partner with. Certainly, my opinion was based on my desk sgt perception, not a s a partner.
There are 6 seasons of Bosch & I've just started season 4. And next year season 7 will be last which is best so they can go out on top. If you like cop procedure dramas & can put up with a whole lot of shooting & maybe turn a blind eye at some of what goes on it's a pretty good show.
- November 28, 2021
Email ThisBlogThis!Share to TwitterShare to FacebookShare to Pinterest