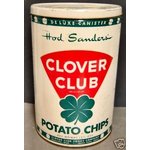 I'm slowly binge watching 'Perry Mason' & the story I'm in now involves a woman who had gambling debts charged with killing a poker club owner. The club was called the Clover Club. That actually has little to do with this post but it's where we started.

Growing up in Arizona, we had no school cafeterias so my mom would make my lunch every day.  Picking out a lunch box was the 1960s version of picking out a backpack these days.  But in my lunch almost every day was a sandwich, Clover Club potato chips, a piece of fruit & a cookie.  I liked the BBQ chips the best.  And Clover Clubs were the best chips.  On the back of the bag was this story.  I always think of  Cover trading her piano for a delivery truck.  And even then, for that sacrifice, I thought her name should be on the bag along with Hod's.  I don't know if flavor was as good as I remembered but I don't remember ever tasting a BBQ potato chip that tasted better.  It could have been because my mom packed it.

The picture is the 60s logo although I seem to remember the BBQ having some orange on the bag.

They appear to still be in business & still distribute regionally.  Next time I'm in Arizona, I'll have to find a bag & put them to a taste test.

Back in 1938, Hod and Clover Sanders were a talented young couple, eager to start their own business. They lived in the quiet country town of Kaysville, Utah, about 17 miles north of Salt Lake City. They noticed that almost everyone in the area had some kind of cooking specialty, such as homemade chili sauce, apple pie, or chokecherry jelly. For Clover, the specialty was potato chips. So, that same year, the Sanders founded the potato chip company that still proudly bears Clover’s name.

With a little help from the local bank, the Sanders were able to purchase their first batch of potatoes and a cooker. Clover supervised production, just as she did in her own kitchen. It was Hod’s job to buy the potatoes and sell the chips to local stores. Back then the company’s “delivery fleet” consisted of one used truck acquired in trade for Clover’s prized piano.

The secret to Clover Club’s superior quality is the same today as it was in those early years—we care. We’re still a hometown company, and we want to provide you with the finest potato chips in the world—just as we’ve been doing for 70 years.