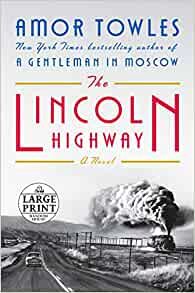 Last year I read 2 books by Amor Towles. The first one I read was 'A Gentleman in Moscow', a book about the adventures of a Russian poet who was sentenced to house arrest in a hotel for life. I found it a fascinating story & the writer is amazing. This was actually his 2nd book. The first was called 'Rules of Civility' & I went back & found it.too. It was very good as well, still with great writing & an interesting story. So when I heard the author was publishing another book, I was very excited. I even bought it in hardback, something I have not done in years. I don't normally read a book a 2nd time so it's on Ebay now, still the New York Times #1 best seller. I'm hoping I can get what I paid for it.

So, the new book is still supurbly written. He has a great command of language & crafts a story well. He has interesting characters & his story moves along. BUT. This book is not at all what I expected. It starts off with a goal & ends up going a completely different direction. And while its good, it's not great. I read up about the real Lincoln Highway that was initiated in 1912 & gave a drive across Americal from Times Square in NY to San Francisco. It still exists although changes in the actual highway have made it something like 2000 miles longer than when it started. Some places, like Nebraska, are proud to brag it goes all the way across their state while other states seem to know nothing about it. I'ld never heard of it til I read the book. And I didn't learn much about it from this book. But there is always Wikipedia. I'm thinking maybe if the book had a different name my perspective would have been different & I might have been more satisfied if I was expecting road trip adventures. And it's hard to explain...theydid have road trip adventures, just not the kind I was looking forward to. But I do recommend the book. The ending is unexpected. And the character Sally was not only annoying but completely unnecessary.
And as an aside, the book was a little too long. Omitting the Sally chapters would have probaly taken 50 pages out. But I find most books too long these days. It's like they are being paid by the word. I blame it all on J K Rowling who took 7 books (and 8 movies) to tell her story. It made multiple books to tell a story fashionable. It makes me think of some young writers Iworked with at school...their minds just wander & wander through details. A good editor can do a lot to tame that. Amor Towles had a good editor but they should have vetoed a few things.
Here is a historical marker from the Lincoln Highway in Carson City, NV. I love the simplicity of their logo. 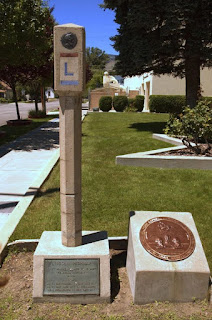 - November 28, 2021
Email ThisBlogThis!Share to TwitterShare to FacebookShare to Pinterest