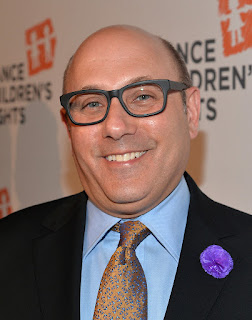 I can pretty much do without Hollywood "stars" these days.  They tend to think their opinons are important & they use their "celebrity" to force it down everyone else's throat.  They don't seem to notice the cesspool of their industry & the ridiculous, tone deafness of their poor, poor lives.  Only a million dollar home.  Their jobs are as difficult as being in the military.  Idiots.

But there are a few that seem like genuinely nice people & who are the best part of anythng they attempt.   Some even outside of show business!   Willie Garson seemed like one of those guys.  He was on 'Sex & the City" as Carrie's friend Stanford Blache & was easily the best part of the show.  And on 'White Collar', he played scene stealer Mozzy, an odd & loveable man with a distrust of all things establishment.   Mozzy was adorable.  He was in lots of other things too but those two were the most memorable for me.

Off screen, he was a single man who adopted a 9 year old son about 12 years ago, was an advocate for adopting older childeren & by all accounts was an ideal dad.  Willie's friends sang his praises as a person & as a dad.    And he's a frequent guest on game shows where people were paired with "celebs" & he's smart as a whip and kind.  If I was evern on one of those shows, he'd be my first choice. as a partner.

I'm not a person to gush over celebrities.  I think I probably made that clear.  But I liked the man.  Unfortunately he died last week at 57 from pancreatic cancer.  It was announced by his heartbroken & loving 20 year old son.  He was praised by all kinds of friends & fans.  He sounded like on of the good guys.   And the world is less kind because he's gone.  May he RIP.