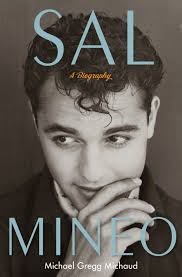 I just finished a book called ‘Sal Mineo: A Biography’ by Michael Gregg Michaud.  It tells the life of the actor from his birth in 1939 to his death in 1976.  It details his life as a child star, working on Broadway to keep him out of trouble on the streets, his teenage years leading to an Academy Award nomination for ‘Rebel Without a Cause’ to end up as a has been, broke and practically unhireable.  For many years he supported his entire family—his father, a casket maker, his mother who mismanaged his career and money from the beginning and 2 brothers and 1 sister.  By the time he found professional management, his money was all gone and it seems everyone knew he was a deadbeat but everyone let it go by.  He’d move from house to house until he got evicted and found another person to use. He found many acting jobs beneath him and certainly manual labor never crossed his mind. He felt that as a 2 time Academy Award nominee (2nd was for ‘Exodus’) he was entitled to live anyway he wanted, and trust me he did.

He starts off chasing the girls, notably a 14 year old actress who lost her virginity to him when he was 21.   In fairness, she was a woman who was around for the rest of his life, although the relationship changed when she caught him in her bed with another man.   Sal “didn’t like labels” but felt he could basically have anything and anyone he wanted and trust me, this books names names!  He was bi-sexual but made no secret that he liked the boys more.  He was quoted early as saying he like the little, flat chested girls and then it was the young boys.  He was basically portrayed as a predator who would go after whoever and whatever he wanted.  Famous names jump off the page…Don Johnson, Jay North (Dennis the Menace), Jon Provost (Lassie), David Cassidy (all claim no sex here) and Bobby Sherman, the first boy I loved at 12, who Sal helped get on TV and then when BS got what he wanted it appeared he distanced himself from his friend.  It was allegedly Bobby that Sal’s girl found him in bed with.  Sal Mineo’s obsession with sex and the gay lifestyle made him practically an outcast in Hollywood in the 60’s.  He turned down minor money paying roles in tv and movies to chase dreams of making gay, erotic, mainstream movies in an era when Hollywood was having none of it.

Sadly, he was murdered in what appears to be a random robbery attempt in 1976.  He had something less than $10,000 in assets while having $50,000 in debts.  He had been in show business for more than 25 years and had nothing to show for it.  He had also met the man of his dreams.  Although “committed” it did not stop either partner from going after whoever they wanted whenever they wanted. He was narcissism personified.   He felt he deserved whatever he wanted, the minute he wanted it.

I’m not sure he would be a man I liked or respected.  His lifestyle was reckless and hurtful.  He took advantage of people younger and more naïve than he who were probably just thrilled to be in his presence. And I can only imagine that he left them hurt and confused when he was done with them.

I do recommend the book.  If you can get past the smarmy, it does give a glimpse of the Hollywood machine that is pretty interesting and gives some tales of old Hollywood which fascinated me.  In the old days, the system seemed to protect their own.  Now the paparazzi is everywhere and their kids can’t go to kindergarten without a camera in their faces.  I kind of like the old way better.  But it is kind of fun learning a few secrets!!
- November 27, 2021
Email ThisBlogThis!Share to TwitterShare to FacebookShare to Pinterest