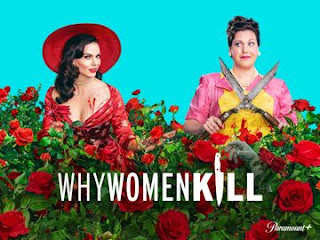 I have a streaming service called Paramount+ & they have an original series called 'Why Women Kill'. There are 2 seasons out, 10 episodes per season.

The first season bounced between 3 different stories, set over 3 generations of residents of one particular house.
The first story was set in the '60s where Gennifer Goodwin was a housewife who catered to her husband's every need while mourning the loss of her only child & dealing with a cheating husband.
The second story was set in the '80s where Lucy Liu married to a man she finds out is gay. They deal with AIDS in it's early stages. I'm not usually a LL fan but she was great here.
The third story was in modern times with a bisexual woman who brings another woman into her marriage & things go horribly wrong. This was my least favorite arc.
All three stories were compelling & well written & well acted & the entire season was very enjoyable.
Season 2 was different. We had one main character, Alma, a frumpy housesife who wanted to join a ritzy garden club. She had a nice husband who was a veterinarian & a sweet daughter. Her garden club ambitions led her to deal with anyone who got in her way. Again, the casting & acting are first rate. The story is very entertaining. The bonus to this season is it's set in 1949 & the costumes, sets & cars add a wonderful extra dimension. I love this era. And they did it beautifully.
I'm sorry they're are no more episodes, hope there is a season & I'm sad I have to probably wait another year.
One aside is Alexandra Daddario (Jade, season 1) is the brother of Matthew Daddario (Scooter, season 2). They look very much alike & did a great job. Both performances were stand out.
- November 28, 2021
Email ThisBlogThis!Share to TwitterShare to FacebookShare to Pinterest