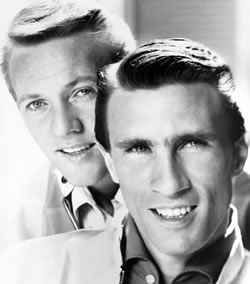 I have developed a habit of watching Facebook & YouTube videos because there are always some there & they are pretty short & I don't have to commit time to them. And one of my favorites is "reaction" videos. These are random people who listen to songs they've never heard & react to them. I have a couple of these guys I really like. A pair of twins in Chicago (I think) & a couple of girls although I watch others. My favorites tend to be open & respectful & really enjoy what they do.

All have reacted to 'You've Lost That Lovin Feeling' by the Righteous Brothers. And all were blown away. The video they reacted to was the same one...a black & white video of a 1965 TV show. It's an oddly shot video. It starts of with a darkened stage & Bill Medley starts singing & they put a spotlight just on him. And the reactions begin...first thing of every reactor is surprised about is that Bill Medley is not black. Almost everyone comments on that first. Then they are rightfully blown away by his voice. Then Bobby Hatfield comes in & everyone is gobsmacked. The men are impressed. The women are swooning-- their eyes light up & smiles light up & swaying begins & there are sighs. I think I saw a couple of actual orgasms. The comments are about the strength of the voices, the fact that there is actual talent, that we can understand the words. I heard the word "golden" several times.
These days, lots of women feel a need to strut their independence. There is nothing wrong that. But they also rage against traditional relationships like every man is out to rule & ruin their lives. And that's simply not true. Good guys are out there who want to make their lives easier & better. And as much as many rail against it, I truly think most women want a man who can at least metaphorically sing to them & treat them special. Someone who says they'll get down on their knees for them. Someone who tells them they are "my soul & inspiration" (another song). And I think we as women respond to that much more than rap songs that denigrate women & call them bitches. It makes me sad that women settle for that. But I guess they don't know any better.
On an aside, we saw the Righteous Brothers in Las Vegas at MGM several years ago. I can't remember the exact year but it was mid 90s...we were staying the the Hacienda & I think it was the year before they were imploded in 1996. The guys sounded the same...that is, wonderful...and we were on like the second row. I could have reached out & touched them. I too was swooning. Bobby Hatfield died in 2003. Bill Medley is 80 & still performing with a faux Righteous Brother now. I'd pay to see them again.
- November 28, 2021
Email ThisBlogThis!Share to TwitterShare to FacebookShare to Pinterest