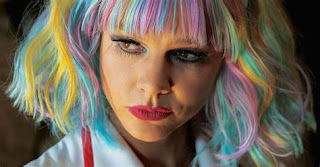 Tonight I was looking for a movie to watch which is kind of rare anymore. I wanted something upbeat & cheery, with a happy ending but I'm not sure they even make those kind of movies anymore. I'd heard this movie was good although I didn't really know anything about it.

Carey Mulligan plays Cassandra, an aimless young woman who dropped out of medical school after her best friend committed suicide after being gang raped while drunk by fellow med students. Cassandra in her grief goes after people she thinks are responsible for her friend's suicide, including some of the now doctors who committed the crime & protected them. She also acts drunk in bars & then takes revenge on guys who think that every girl in a bar with a few drinks is easy prey. She also rekindles a friendship that eventually turns into a romance with a former fellow student.
I don't want to give the entire movie away but the story is pretty fascinating & really ends the only way it can.
Good movie. Great performance by Carey Mulligan. Good writing which is pretty rare this day.
Trivia: The movie was written by an English actress named Emerald Fennell who played Nurse Patsy on Call the Midwife. She was not on the show long but she was very good. I love seeing someone we know (you know, sorta) succeed.
- November 28, 2021
Email ThisBlogThis!Share to TwitterShare to FacebookShare to Pinterest