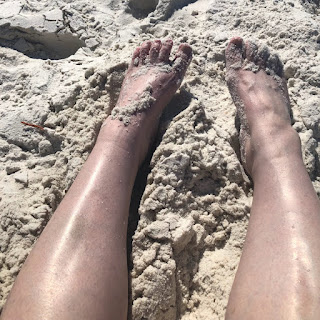 A couple of months ago my friend Linda asked if I wanted to go to Florida for a few days.  She had a time share that she sold but still had some points left.  She was looking for a place to go & scheduled a condo in Panama City Beach.  Or maybe Panama City.  We seemed to be in both places & they seemed to be different places.  But either way, it was a really nice place.  We stayed at a resort, in a 2 bedroom villa which was very nice.

I'd hoped for a little time on the water, maybe dolphin watching but was told that most of the boats were out of service, being inspected by the Coast Guard before they were winterized so no boats.Bummer.  Next time.

The first day we arrived it was very blustery & a little cold so we were worried there would be no beach time.  We ate at a restaurant on the beach called Pineapple Willys which I called Panama Willys all week because it made more sense.  It was very nice & I got a great picture of the water.   And we went to grocery of course. Linda read a news story that the Pineapple Willys owner died this week.  He sounded line a nice & generous man.

On Sunday morning, we went out to the same beach but there was no parking.  We possibly illegally parked for a few minutes & made it down to the water.  Not too cold, clean sand, very nice but we were afraid of getting towed so we went off looking for different beach access.  We ended up in Rosemary Beach, an entirely different city where the residents appeared to be really well off, at least in the area we were in.  I've never been to New Orleans but I pictured this area as old time French Quarter.  It was gorgeous.  Linda is a huge supporter of local bookstores so we went looking for one called The Hidden Lantern.  We did find it & it was charming.  Before we found the bookstore, we came upon a farmer's market but only about 1/2 hour before closing time so we didn't have a lot of time.  We did manage to spend money, of course.  We bought honey lotion, a bar in a tin, from the honey lady.  You just rub it over your hands.  It's very cool.  And I found the finest farmer's market find of my shopping days...a tomato & bacon pie.  I just bought a small one, one that I'm sure was supposed to be a single serving.  Basically, it is tomato, bacon, onion & cheese and it was possibly one of my favorite things ever.  I made one when I got home...I'll do another post on the one I made under my Kitchen Adventures tab.

On Monday, we went shopping.  We didn't have a lot in mind but went to an area called Pier Park where they possibly had an amusement park  I saw a ferris wheel with little fully enclosed cages but I didn't see anything else.  I pointed out the cages because the ones I remember were open with a bar across us.  These cages looked safer.

We found a store called the Southern Living store, like the magazine.  It was a home interiors store owned by the magazine & they lady told us there were only 5 in the entire country.  They had nice but overpriced stuff.  And we bought a couple of souveniers...a post card, key chain for the charm & a t shirt. And we paid too much money for lunch at Paula Deen's restaurant.  Food was ok but not great.  They do make good chicken & dumplings, the kind my mom made.

On Tuesday morning we had the best breakfast....I heated up our glorious tomato & bacon pie, slices of cheese, grapes & farmer's market tomatoes.  After, we headed to St Andrews State Park, which had a parking lot & great beach access.  It was a gorgeous day & not too hot or cold.  We spent a couple of hours just hanging out.   Linda said she saw a news story a couple of days ago that the day we were there a missing man washed up on our beach.after we left.  Really glad we missed that.

The feet picture was taking at St Andrews.  I love the picture but not the cankles.  Ack.

We had a great time...very relaxing.  And it was great spending time with my 40 year friend.  I loved being there.  The traveling, not so much.  Too much time in airports, too much time in a mask.  It'll be a while before I travel again by air.  It was miserable.  But the trip was wonderful.