When All the Laughter Dies in Sorrow 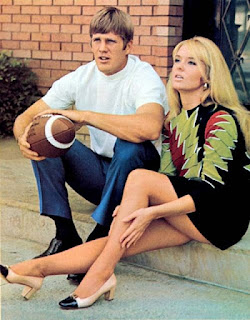 When we moved to Texas when I was about 12 in 1970, my dad became a Dallas Cowboys fan because it was a Texas thing to do & because we had 3 tv stations & they were the game of the week.  As a Texan I'm supposed to love football & I don't hate it.  I undertand most of it.  I watch Texas Tech.  I watch the Chiefs in the NFL because their quarterback is Patrick Mahomes from Texas Tech.  And sometimes I watch on Saturdays because its noise & sometimes I watch the NFL Browns on Sunday to see Baker Mayfield lose, which he does often.  And it's glorius.  But I'm off topic...

The other day on Twitter someone referenced a book called 'When All the Laughter DIes in Sorrow', an autobiography of former Cowboy (among others) from this era, Lance Rentzel.  I vaguely remembered him.  I love biographies & it found it on Ebay for cheap.  I finished it last night.  And hmmm.

Lance was a golden boy.  His dad worked in the Truman administration.  His family was rich & they lived in Oklahoma City after his dad's retirement.  Lance was a smart guy, talentedin a bunch of things, excelling in football.  He attended the University of Oklahoma where he says he was teased for being rich, from a private school, his foofy dorm room where he hung up his awards, his devestationaly good looks...you name it.   He also admits to being a slacker, not willing to give 100% to practice, showing up when he wants & disobeying rules on every turn.  And of couse he's a big hit with the ladies. Oh, and during his senior year he violated NCAA rules by signing a pro contract before a bowl game so he, along with 3 others, was ineligible & his team lost.  It was the beginning of a career of not showing up for his team.

He was drafted by the Vikings where he continued his slack off ways & had to work harder than he thought he should be required to make the team.  He hated Minnesota.  And he was lonely & bored & when Lance got bored he did some really stupid things.  The stupidest was driving up to 2 little girls playing outside & exposing himself to them.  He admits it up front.  Until it's time to face the music of course.    He was pled down to disorderly conduct.  And got traded to the Cowboys.

And then in Dallas he got lonely & bored again & found a 10 year old little girl & exposed himself to her too.  And basically got suspended & missed the playoffs, again letting his team down.  He'd also gotten married to a singer/actress named Joey Heatherton & he got to let her down too, ending up with 5 years probabtion.  And then he got traded to the Rams.

The book was written in 1972 so we don't get anything after that.  I Googled to see what's what...he was arrested for pot , ended his NFL career in 1975 & after a separation & reconciliation he & Joey divorced.  Interesting that neither ever married again.  While his life is woefully undocumented, Joey got arrested several times for cocaine possession, assulting boyfriends & public officials, probably all the time yelling "Do you know who I am??".  Both are still alive.

There are part of this book that really upset me.

After the first incident in Minnesota it was swept under the rug.  By the police, by the Vikings, by the NFL & by the Cowboys.    And after the second incident in Dallas, the same thing would have happened.  The Cowboys & the league gave him another pass.  And the law would have done same except that the 10 year old's dad, a neighbor & a lawyer, wouldn't let it go.  He was ready to go to court.  But Rentzel's & the Cowboys' high priced attornies promised to drag the little through the mud til her dad finally agreed on a long probabion & a public alloucution in court.  Oh, and he had to see a psychiatrist, which he didn't think he needed.  Again, no real consequence.

And to top it off:  Lance Rentzel (and his mommy) think HE is the victim. He lost his reputation & his marriage!   Why would anyone make such a big deal of this?  He is the one who suffered!  I wonder if he or his mommy would feel the same if their little girl  had to see Lance's junk.

Oh, and get this....He finally did find a psychiatrist to "diagnose" him.  Turns out he was rebelling against being a mama's boy & when he felt like he wasn't un-masculine, he'd find a little girl & traumatize her by showing her his stuff.  And yes, Lance & mommy & psychiatrist, it's traumatizing.  But of course, they were just babies, not big football stars.

And an observation: If he got caught twice he is either the unluckiest GoldenBoy  ever or he probably did it a few time when he didn't get caught.  And there was nothing in this situation that a pair of hedge clippers wouldn't fix.

The book is well written with lots of football stories.  He needs to know, along with a few others, the difference between intents & intense.  Might be enjoyable if he wasn't a creepy weinie wagger (police term).

Picture is of Lance & Joey, who he "loved very much" but not enough to keep his dick in his pants & not embarrass her.